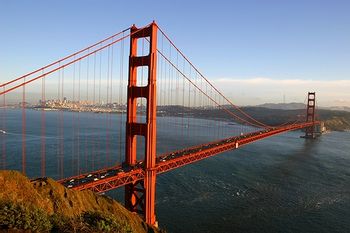 "I left my heart in San Francisco..."
"Whoever after due and proper warning shall be heard to utter the abominable word 'Frisco', which has no linguistic or other warrant, shall be deemed guilty of a High Misdemeanor, and shall pay into the Imperial Treasury as penalty the sum of twenty-five dollars."note Worth about $500 in today's money
— His Imperial Majesty Emperor Norton I

, Emperor of these United States and Protector of Mexico, 1872.
Advertisement:

As a famously scenic Californian city with a reputation for eccentricity, controversy, and singular history, San Francisco and the surrounding Bay Area pop up fairly frequently in media, particularly visual media, which just love the city's iconic hills and eclectic architecture.

In almost any film or TV show, the cable cars will be made to seem almost everywhere, with the stock establishing shot a cable car cresting over a hill lined with Victorian houses while the Golden Gate Bridge is framed in the background. Car chases are frequent in TV and film thanks to the hilly streets and neato views (often making a point of going down the famously-winding Lombard Street

). The city is famous for its liberal politics, association with countercultural movements (the beats and the hippies followed on each other's heels in the mid-20th century), prominent gay population, longtime history as a hub for Chinese immigration, and its reputation for attracting colorful eccentrics who become tolerated or even celebrated in a way they probably wouldn't be anywhere else in America.

In reality, these conventions are all true, but only to a degree. The cable cars only cover a small part of the city and are favorites of tourists but few locals; the streets are much too narrow and the terrain too varying for a really awesome car chase to happen anywhere but the freeways; and while droves of liberal activists, gays, and immigrants do call San Francisco home, there are as many less visible demographic groups as any other major city.

San Francisco's reputation as a home for misfits and oddballs started with its Gold Rush roots, when it essentially became a mining town that outgrew itself and where fortune-seekers could embrace the mythos of the west and live free of the more stolid conventions of the East or whatever other country they came from. Norton I

, Emperor of the United States and Protector of Mexico (whose decree about a certain much-loathed nickname graces the top of the page) is today probably the most famous of all San Francisco eccentrics, but in his time he was just one of a menagerie of strange, self-made hero kooks.

Geographically, San Francisco is rather small for a city of its prominence, since it sits on the end of a peninsula and has no room to grow. The term "Bay Area" refers to the constellation of counties surrounding the San Francisco Bay and their related cities. Oakland, the city on the eastern shore of the Bay, has always been San Francisco's unofficial sister city, these days something of a troubled, hardscrabble town that nevertheless keeps alive the blue collar heritage that the city has lost a bit. Just to the north of Oakland is Berkeley, seat of the region's radical political reputation and home to one of its two most prestigious universities (UC Berkeley). The North Bay, on the other end of the world-famous Golden Gate Bridge is characterized by the homes of the ultra-rich and the sprawling "wine country" that produces most of California's most notable vintages. And in recent years the South Bay and the Peninsula have come into their own as the seat of Silicon Valley and the engine behind the region's enormous economic boom, driven by social media and software startups of all stripes. Many of those startups were founded by alumni of the Bay Area's other ultra-prestigious university, Stanford (located on the Peninsula).

San Francisco sits right on top of the San Andreas Fault, and there are numerous smaller (but no less dangerous) faults in the surrounding area; earthquakes are inevitable, and jaded long-term residents will often wave off a smaller one as an Unusually Uninteresting Sight. The largest earthquake in city history was the Great Quake of 1906, which killed over 3,000 people, destroyed most of the city due to the shaking and subsequent uncontrollable fires, and caused changes that still reverberate today note (Chinatown was rebuilt further west in its present location, and many refugees were resettled in nearby small towns which contributed to their development as suburbs); each year, bells are still rung on April 18th at 5:12 am to commemorate the disaster. The most recent quake to have a significant effect on the city was the Loma Prieta earthquake

note (aka the "World Series Quake", since it happened at 5:04 pm, a half-hour before the scheduled start of Game 3 of the World Series between the San Francisco Giants and Oakland A's. This likely saved many lives because people left work early to watch the game and consequentially weren't caught in rush hour traffic when buildings and roads started collapsing; as it was, the quake caused 63 deaths and 3,757 injuries) of October 17, 1989. Having water on three sides makes the weather wildly unpredictable and generates the famous fog that rolls across half the city at any given time (the fog even has its own Twitter account. Really). Though not as large as other major metropolitan centers, San Francisco is a city of diverse and occasionally clashing neighborhoods, from the famous gay hub in the Castro to the always-trendy Mission District to the uber-rich perched on Nob Hill or the down and dirty poor in the Tenderloin. Some neighborhoods consist of only a few blocks but manage to create their own distinct flavor within that little world. And neighborhoods are often changing: SoMa (South of Market Area, Market being the city's most prominent street) used to be a grungy skid row but in recent decades has gentrified into a trendy business district (although, intriguingly, the area's vogue for BDSM-themed bars and shops remains...).

The area has vibrant and loyal sports fandoms. Two major sports teams currently play in San Francisco, MLB's San Francisco Giants and the NBA's Golden State Warriors. Both had great success in the 2010s, with the Giants winning three World Series championships in 5 years (2010, 2012, and 2014) and the Warriors (who played in Oakland at the time) winning three NBA championships in 4 years (2015, 2017, 2018). The Warriors moved to their new home at Chase Center, just south of the Giants' field at Oracle Park, in 2019.

Other notable teams in the area include:

If you're thinking of moving to San Francisco, whether for work or because you really like the city, be prepared to pay out the nose for rent. San Francisco rent is infamously some of the most expensive in the country

; $4,500 a month for a standard two-bedroom apartment isn't just costly, it's the average rent in the city. There's even a case

of someone paying $500 a month to live in a box. Inside a living room. Not helping this is the rise of tech startups in the area that require prospective employees to move to San Francisco to work, which has become something of a meme amongst critics of Silicon Valley tech culture.

Though less frequently a trope, San Francisco is also particularly known for its large homeless population, which shows up primarily when a creator showed their work and generally has a point to make with it. Another uncomfortable and little-discussed fact is that the Golden Gate Bridge is the second-most frequent site of suicides in the world.

If you're visiting, for God's sake, do not call the city "Frisco" and please don't forget your heart (or your head) when you leave.

San Francisco in the media: