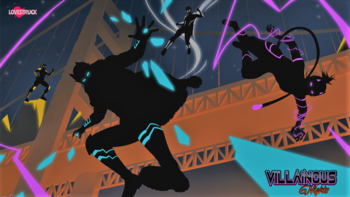 Villainous Nights is a Romance Game Visual Novel by Voltage Entertainment USA, released through their Lovestruck app for iOS and Android devices. It debuted as a pilot in February 2018 with two available routes, and was picked up as a full serial game beginning in April 2018.

The story takes place in an alternate San Francisco where the heroine and Player Character is thrilled to have landed an internship with Optimus, a prestigious corporation that is the leading sponsor of super-powered humans in the world. On her very first day on the job, however, she catches a masked intruder in the middle of an attack on the company, and soon her perspective on who's right and who's wrong begins to shift as she becomes more and more entangled with the team that call themselves "the Syndicate."

Even evil is just shades of grey, and love can bloom in the darkest of nights.