Visual Novel / Havenfall Is for Lovers 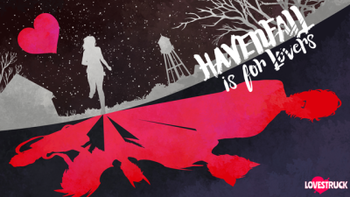 Havenfall Is for Lovers is a Romance Game Visual Novel by Voltage Entertainment USA, released through their Lovestruck app for iOS and Android devices.

The story takes place in the one-stoplight backwater of Havenfall, Indiana. The Player Character has accepted that she'll never make it out of the dead-end town, but she's determined to help her younger sister Grace get through college and give her a chance at a better life somewhere else. Then Grace goes missing, and a lot of things in Havenfall turn out to be more than they appeared.

The only people willing to help find Grace are the ones she's just discovered are not human: a vampire, a werewolf, a devil, and a djinn. To save her little sister, the protagonist will have to learn to trust a monster... of course, this being a romance game, it isn't going to end there.