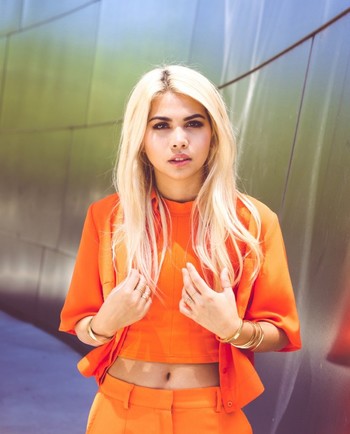 Hayley Kiyoko Alcroft (born April 3, 1991 in Los Angeles, California) is an American actress and singer-songwriter. Born in Los Angeles, she got her start in 2007 with the The Stunners, an all-girl singing and dancing group. The group released a couple singles before splitting in 2011.

In 2009, she began playing Velma Dinkley in Scooby-Doo! The Mystery Begins and its sequel Scooby-Doo! Curse of the Lake Monster. She then began working for Disney, starting with guest starring in four episodes of Wizards of Waverly Place, before starring in the television film Lemonade Mouth. In 2015, Hayley landed a leading role on the short-lived series CSI: Cyber.

Since then, Hayley has been focusing on her music. Her first EP, A Belle To Remember was released in 2013, followed by her second EP, This Side of Paradise in 2015. The latter EP contained the song "Girls Like Girls", the music video for which currently has over 89 million views on YouTube. Her third EP, Citrine was released in 2016. Her debut album, Expectations, was released in March 2018.

Hayley is a lesbian, while her tendency to sing about loving women and to make music videos featuring girls falling in love has gained her a large LGBT Fanbase. Her fans affectionately refer to her as the "Queen of the Gays", though "Lesbian Jesus" is catching on

Hayley and her music contains examples of: