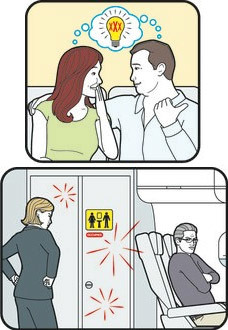 "Sorry we're late, your Majesty, Carla and I were stacking over Gatwick — I had to come around three times before I'd made my final approach!"
— Hugh Dennis (as Nicholas Sarkozy, President of France), Mock the Week
Advertisement:

Maybe it's the lower air pressure. Maybe it's travelling at 500 mph. Maybe it's just a desire to do what few people have ever done. The complimentary wine probably plays a part. It's unclear, but sometimes people just like to have sex on aircraft. Usually in the toilet, which is not exactly the most romantic location on the planet (nor spacious on most airplanes), but is one of the few private places. Occasionally, however, the more bold will attempt it at their seats.

The Other Wiki has an article on this

. It is worth noting that the airline company will probably sue you, since it's of questionable legality. There are, however, dedicated companies for this sort of thing (however, despite the name of the Trope, there is no actual "club" of this name). Realistically, given the layout of most modern-day airplanes, unless it is very late at night and everyone is asleep and no attendants are looking, it's difficult for two individuals to enter the same washroom at the same time without being noticed, much less exiting when the odds of someone waiting to go in is very high.

For the stage beyond the Mile High Club, see Zero-G Spot. Compare Three-Way Sex in terms of sexual rubicons all men are supposed to aspire to.

There is also the 'Meter High Club' sometimes called 'Mile Post Club' for people who have had sex on trains; with sleeper services this is a lot more practical and legal, but also common place in the days of 'closed compartment' trains. However, these days sleeper trains are more and more of a rarity and coach style seating is replacing compartments, making the lavatory once more the last place one can... discuss Uganda...

May involve a Sexy Stewardess.

Kaz has never been on a plane before, so he's in for quite a ride!

Kaz has never been on a plane before, so he's in for quite a ride!