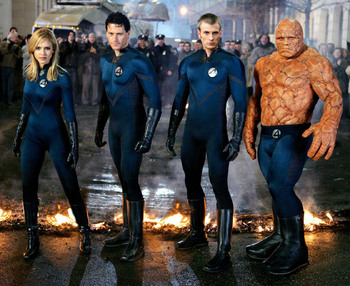 Some superhero teams wear matching costumes so it's clear to everyone who the team members are. This may mean their uniforms have the same colors and logos, or possibly a design format they all follow and apply with their own colors. The matching suits may also serve a practical purpose.
Advertisement:

Sometimes the costume may have different details and touches in different characters; see Nonuniform Uniform. Sometimes there may also be members who wear their own duds; see Custom Uniform.

Every Sentai, by default, is an example of this.

Note that this trope can also apply to supervillain teams and also does not apply to one-time missions such as space or underwater travels that naturally require matching group attire.