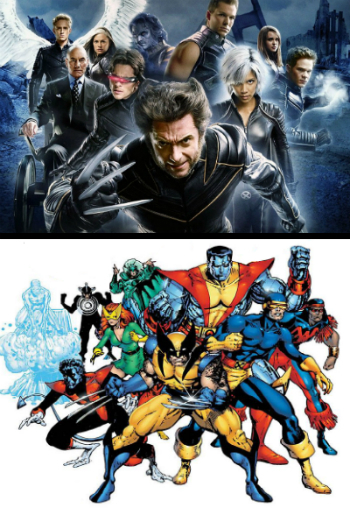 You actually go outside in these things?
"People may buy that our character has radioactive powers or is from another planet, but a colorful spandex costume?! Are you crazy?! No audience will accept that! Nope, it's one color, head-to-toe leather for our hero!"
— Strong Bad, Strong Bad Email "Comic Book Movie"
Advertisement:

Whenever a character is well defined by wearing bright and colorful clothing, there is an increasing likelihood of a more modernized redesign that puts them into darker, if not outright black outfit. Also very popular is to give them a leather jacket or similar heavily texturized clothing. This isn't necessarily to make the characters Darker and Edgier, but because colorful costumes don't always translate well into seeming like practical combat outfits. As the name suggests, this is very common with the movie adaptation of a superhero comic book, or live action material in general.

Usual justification is to make the suit actually practical or add a sense of realism, since spandex isn't known for stopping bullets (and the look of superhero costumes originated in circuses and other performance art). Black also looks very good on camera (compare Little Black Dress on that) and certain colors are either difficult to maintain consistency under different lighting or would actually make the use of certain Chroma Key effects more complicated. At other times they retain some degree of the original colors but offset it by being darker shades or pairing it with black pants or jacket. Sometimes there is outright tactical redesigns that emulate the original look but looks like armor or otherwise utilitarian rather than strictly a skin tight outfit. It's typically involved with a Pragmatic Adaptation as complete fidelity to the source material often leads towards absurdist imagery, which is fine for works like Kick-Ass or the '66 Batman (1966) but can hinder a more serious interpretation of the characters. But this doesn't always happen strictly in adaptations, ultimately it's about black or darker redesigns. Retools and remakes also use it quite often to fit with evolving audience expectations. Almost any brightly colored comic book character of any merit has a "black variant" sometime in their history.

For female characters, this can often lead to Adaptational Modesty.

The trope has older roots, but the Trope Codifier is the X-Men Film Series, where a very colorful group of comics characters used primarily black leather outfits, while non-X-Men characters usually wore common street attire. The reasoning given by the production is that the X-Men are a team and should have uniforms, and that since few characters were Nigh-Invulnerable or had a Healing Factor the outfits should look somewhat protective. Subtle color highlights were used as a Mythology Gag to their original outfits, and a joke was made about the oddities of both the movie costumes (while they blended into the night they still stuck out in public) and if they would prefer going into a fight with yellow spandex.

Would Wolverine rather wear black leather or yellow spandex? (The Trope Maker)

Would Wolverine rather wear black leather or yellow spandex? (The Trope Maker)