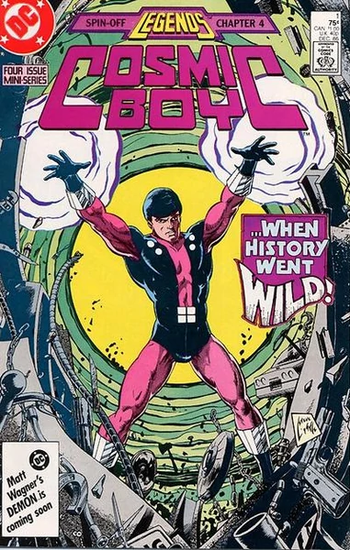 "I've been watching this "television" device, and it seems this is a very strange century you took me to. They don't even understand what heroes are for."
—Lydda
Advertisement:

Rokk Krinn, otherwise known as "Cosmic Boy" or "Polestar," is one of the founders and the default leader of the Legion of Super-Heroes, an organization from the 31st century. He is a DC Comics character created by Otto Binder and Al Plastino and made his first appearance in the pages of Adventure Comics in 1958.

In 1986 Cosmic Boy got his own self titled four issue miniseries as part of the Legends Crisis Crossover in which Rokk and his girlfriend Lydda try to go on a vacation that is quickly hijacked by one of their greatest foes.

For the title character, see here.