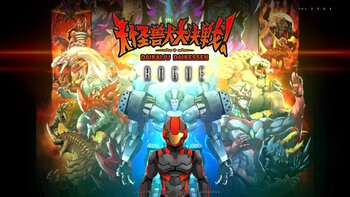 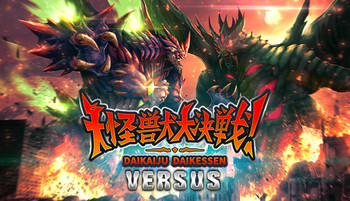 to see the original Daikaiju Daikessen: Versus title.
Advertisement:

Daikaiju Daikessen is a planned series of kaiju-centric indie games by Thai developer and comic artist One Secret Pseudo/Garayann.

The first game in the series, Daikaiju Daikessen: Rogue, is a 2D single-player roguelike Beat 'em Up currently released for Early Access on Steam and Itch.io. Gameplay is inspired by King of the Monsters, a famous series by SNK, and lets the player control one of dozens of fighters, duking it out with other Kaiju and Humongous Mecha. Much like its inspiration, it has a 2½D style of controls in which players can stroll up and down the arena as well as the basic forward and backwards, as well as inputting directions to change attacks. While Story Mode has yet to be implemented, the sheer variety of playable characters and lore is promising. The game has undergone several iterations over its several years of development, most promiently as a multiplayer Fighting Game called Daikaiju Daikessen: Versus, but in July 2021 a Game-Breaking Bug was encountered when the game grew too big and complex for the engine to handle, forcing the game to be reworked into a single-player roguelike.