Video Game / King of the Monsters 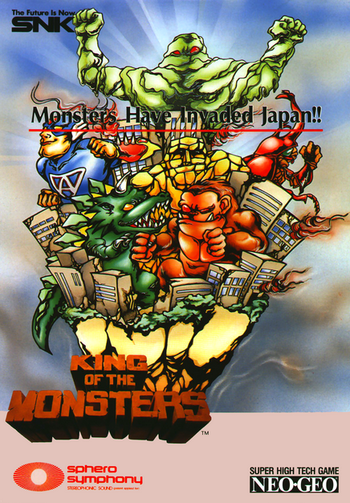 A game series created by SNK in which you can duke it out with gigantic monsters, hence its title. You can also bash buildings and other obstacles for power ups and health. The game play has a 2½D style of controls in which players can stroll up and down the arena as well as the basic forward and backwards.
Advertisement:

The series only consists of two games. The first one is available for the Neo Geo, Sega Genesis and SNES which has a wrestling game complete with energy "ropes", in which the goal is to pin down your opponent for a three count. Tanks, helicopters, and maser cannons also periodically attacked during the matches.

The second game was available for the Neo Geo, SNES and Genesis. The game play of the first two is a side scrolling, cooperative Beat 'em Up while the Genesis version featured a tournament like fighting game in which you must defeat every monster in the game one by one in order to reach the boss at the end, YOURSELF.

Woo and Poison Ghost aren't in the SNES and Genesis ports. Additionally, Poison Ghost, Rocky, and Beetle Mania are not in the sequel — the remaining three are now powered-up versions of themselves, joined by the new boss characters for a total of 10 playable monsters. The listed names are from the US/European version, with the names from the Japanese version in parentheses.

These three are the heroes of the series. In terms of crossover appearences, Cyber Woo would appear as a playable character in NeoGeo Battle Coliseum while Atomic Guy would become a transformation for Original Generation character Yuki in the same game.

Despite the name, this has no direct relation to Godzilla: King of the Monsters! or anything else in the Godzilla franchise (aside from a Not Zilla and a few other Expy characters). Also not to be confused with War of the Monsters, which shares similar themes.