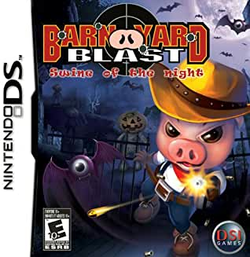 A pig is about to shoot you
Barnyard Blast: Swine of the Night is an action platformer for the Nintendo DS made by Sanuk Games.
Advertisement:

The game consists of six stages worth of platforming and blasting enemies to pieces. The premise is that the (anthropomorphic) piglet Cliffy Belmart has gone playing in the local dark and forbidden castle of doom, tossing toilet paper to and fro, and this has angered some evil entities. They proceed to kidnap him. Robert Belmart, his father, then sets off on a journey through six stages of horror-themed platforming action to rescue his son.

He gets to use a pistol, a shotgun, a whip, and dynamite as his weapons. The pistol is weak but has unlimited ammo; the shotgun fires a strong but short-range burst (a bit strange for being a shotgun) with limited ammo, the whip runs off special weapon ammo (blue hearts), and dynamite is lobbed and has a delayed explosion for a lot of damage but is also limited. Robert also picks up ability cards from stage bosses, which that let him recover HP from blue hearts, spend blue hearts for stronger attacks, run faster, jump higher, or other abilities.

The game is a pretty transparent reference to the Castlevania games, particularly the older ones which were straightforward platformers rather than the more famous and more recent castletroids. In addition, it fully means to lampshade various videogame tropes, and does so quite shamelessly, with famous zany videogame quotes popping up all over the place. And just look at the names of the six levels: