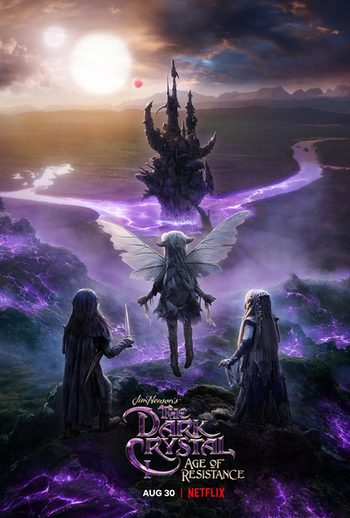 Another world, another time. Rediscover the age of wonder.
"A whole new world awaits you."
Advertisement:

The Dark Crystal: Age of Resistance is a Netflix-produced series directed by Louis Leterrier. It is a prequel to the 1982 fantasy film that was directed by Jim Henson and Frank Oz, The Dark Crystal. Just like the original film, it features animatronic puppets created and performed by Henson's Creature Shop and is based on designs by Brian Froud.

The world of Thra is dying. The Crystal of Truth is at the heart of Thra, a source of untold power. But it is damaged, corrupted by the evil Skeksis, and a sickness spreads across the land. When three Gelfling — Rian, Brea and Deet — uncover the horrific truth behind the power of the Skeksis, an adventure unfolds as the fires of rebellion are lit and an epic battle for Thra's future begins.

The first season's ten episodes premiered on Netflix on August 30th, 2019. Producer Lisa Henson (daughter of Jim) hopes for further seasons. A video game, The Dark Crystal: Age of Resistance Tactics, was released in February 2020, and a 12 issue prequel comic book series, also titled The Dark Crystal: Age of Resistance, from Boom! Studios began in September 2019, divided into three serials telling the story of Ordon and the Dual Glaive, the misadventures of Hup and a thieving bard, and a high-seas adventure that All Maudra Mayrin went on during her youth.

The series has quite a substantial voice acting cast, which is detailed below.

In September 2020, the day after the show won an Emmy Award for Outstanding Children's Program, it was announced that Netflix canceled the show, leaving several plot threads unresolved. Lisa Henson announced that other ways will be found to continue the story.