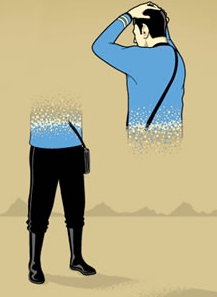 In The Future, no life insurance agency will ever cover Teleporter Accidents. Why? Well to start, it may accidentally send you to Alpha Centauri instead of Mars in a mis-jump, or if you slip you could suffer a Portal Cut and end up cut in two, then again if it's not there you'll suffer a Portal Slam as you hit the concrete, which is still far less painful than being teleported into solid matter and getting telefragged.

All of which pales in comparison to what could happen when the teleporter itself malfunctions. If the Heisenberg compensators are misaligned, then you could come out as an inert mass of carbohydrates (or a screaming mass of carbohydrates), or it might hiccup and create an Evil Twin of you. Then again, the device may work by taking a "short cut" through Hell, so everyone who uses it will Go Mad from the Revelation... and/or come out with an Eldritch Abomination on their heels. The possibilities are endless, and more often than not they are irreversible.

Alternatively, the trope can be Played for Laughs with silly (but harmless and easily reversed once it's no longer funny) effects such as coming out shrunken, expanded or with body parts exchanged with someone else who teleported along with you.

A Sub-Trope of Teleportation with Drawbacks, due to this being a drawback on "safety". Compare and contrast with Teleportation Sickness, where the process is merely uncomfortable... or at least whatever effects it has, even if bad, are not caused by it malfunctioning. (And yes, there is an overlap in a minority of cases.)

Related to Came Back Wrong. Also compare with Destructive Teleportation, which is the theory that a teleporter kills the original and recreates a perfect quantum copy at the chosen location.

For purposes of trope differentiation, teleporter related mutations caused by beaming with or into another organic being go in Tele-Frag. If it's because of the beaming itself, it goes here.

Not to be confused with a Porting Disaster.