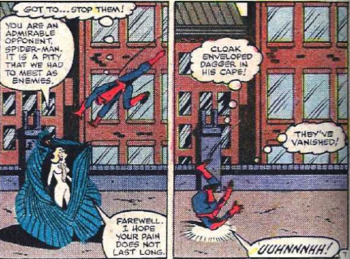 Characters using a cloak, or a Badass Cape, for Teleportation. This could be rooted in the fact that cloaks are often used to hide the user in the dark, so a someone who goes into a dark alley while wearing a black cloak appears to disappear. Expect the user to whip the cloak around so it blocks any view of their body, then for them to disappear when they are behind the cloak.