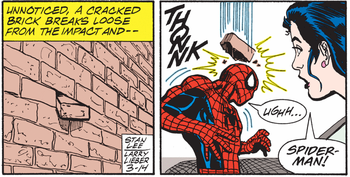 Our hero faces off with his deadliest foe.
Advertisement:

Spider-Man is the daily newspaper strip that is basically the adventures of Spider-Man in an Alternate Continuity to the monthly comic books. The strips are written by Stan Lee and have been illustrated by the likes of John Romita Sr, Alex Saviuk, Fred Kida, and Larry Leiber (Stan's brother). Larry Leiber and Saviuk are the regular artists for the thirty years from The '90s to The New '10s, with Saviuk pencilling the Sunday strips and the daily strips with Leiber penciling the daily strips, and Joe Sinnott as the Sunday artist. Although Stan remains credited on every strip, the strip was ghost written by Roy Thomas from 1999 to 2019, with Lee acting as editor. Nonetheless, in his early years, Lee did work on the strip and it's notable for the fact that unlike the main comics where he used "Marvel Method" (which is more accurately Stan's method), he really did plot out and write the strip himself over several dailies. He actively followed the strip until his death.

Leiber's retirement in summer 2018 and Stan's death later that year called the future of the strip into question. On March 7, 2019 it was announced that Marvel had cancelled the comic, even though several weeks of strips (featuring Spider-Man fighting the Kangaroo) had already been completed, and that it would be replaced by reruns starting March 25th that year. The future of Marvel's foray into newspaper comics is presently unclear, though it's expected to continue in some way under a different creative team. Sunday artist Joe Sinnott (who wrote the first Dr. Doom comic in the '60s) announced his retirement at age 92 after the final Sunday strip was run on March 17. The major changes continued on April 4, 2019, when the Comic Kingdom website that hosts the strips online was overhauled.

There are many changes in the strip's presentation, both to pacing and to how Spidey interacts with the rest of the Marvel Universe. He's met Daredevil relatively recently, and had a crossover with the X-Men in the 90's that was adapted to the Animated Series. There was also a switch to Peter Parker's domestic situation to match with the "Brand New Day" storyline... and readers' letters made the writers agree to drop that. At the same time during the BND era, Lee collaborated with artist Marcos Martin for a series of non-canon one-shots called "Spidey Sundays" in the style of the newspaper strip printed in the main Amazing Spider-Man title as a back-up feature (and subsequently published separately as Spidey Sunday Spectacular #1).

A storyline in the strips from The '70s, where the Kingpin attaches a tracking bracelet on Spider-Man inspired one of its readers, New Mexico district judge Jack Love, to develop the ankle bracelet. The strips were also initially responsible for Peter marrying Mary Jane Watson, with the 616 books following suit. From 2010 through to 2015, the strips were the only place where fans could still enjoy the adventures of Peter and MJ as a married couple, before it was eventually joined by the The Amazing Spider-Man: Renew Your Vows universe, this was swiftly followed by Peter and Mary Jane reuniting as a couple in 616 continuity for a few years. It is not yet known if the strip will ever return with new material, or if the marriage will even remain a fixture of it when it does.

In May 2022, an unofficial fan made continuation

was announced, and launched on June 2nd of that year.

The Spider-Man comic strip provides examples of the following tropes: