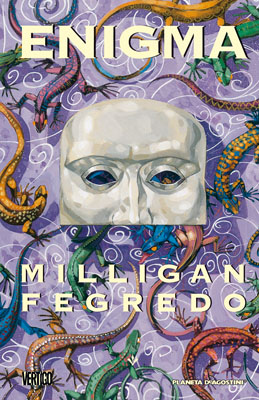 "It's like the Book of Revelations but funnier. It's like the last trumpet but hopelessly out of tune. It's like the perennial battle between Good and Evil, but no one can quite work out which is which anymore, and most people don't even know what perennial means."
— Enigma Issue #3, Opening Lines
Advertisement:

Enigma is a 1993 comic book by Peter Milligan about an astoundingly dull man named Michael Smith, whose life is turned upside down when he gets attacked by a huge-headed lizard monster that sucks peoples brains out through their noses, and is saved by his favorite childhood comic book superhero The Enigma, a masked man with god-like powers. The story primarily centers around him and the comic book's author Titus Bird trying to figure out exactly what the hell is going on.

Enigma is arguably the first comic from a mainstream publisher to feature a gay kiss, and is #15 on the Comics Alliance list of the 50 most important LGBT Comic Books and Characters of all time.

This Work contains examples of the following tropes: