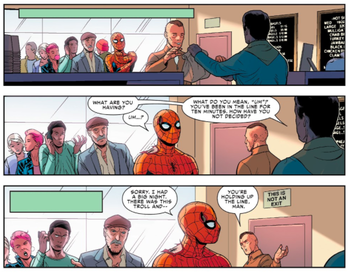 A character who is ordinary enough to be relatable to the average audience member. Everyman characters are often working or middle class and deal with everyday problems, be it school, work, family or romance. They may also be placed in extraordinary circumstances which makes them even more sympathetic as they are in over their head. Everyman characters are not necessary blank slates but are typically more grounded and less wacky than supporting characters.

When an Audience Surrogate, you may expect them to be:

If a leader, then they're a Standardized Leader. The video game version of this is a Heroic Mime in terms of plot, Jack-of-All-Stats in terms of ability, and a Featureless Protagonist when taken to its extreme.

In Dom Coms, the father is often an everyman, struggling just to maintain sanity in his family and keep it together through the zany schemes set up by the wife or kids.

Not every character created with the intention of being The Everyman stays that way. If the writers think Viewers Are Morons, then this character can quickly devolve into a Loser Archetype, with the idea that this is how the average person acts. At this point, the character's message sort of devolves into telling viewers "This Loser Is You".

Despite the name, everymen aren't Always Male but they usually are because Most Writers Are Male.

See also Normal People, The Generic Guy, Vanilla Protagonist, and Unlucky Everydude. Ridiculously Average Guy is when this is taken to an extreme. Drop the Everyman into a fantasy setting and have him still act like everything is hunky-dory and you get the Unfazed Everyman. A character who starts out like this but later becomes a hero (or a villain) better fits the Unlikely Hero or From Nobody to Nightmare Tropes. Bonus points if his name is Mr. Smith.

No relation to the popular Slender Man series EverymanHYBRID. Or the Reaper Bird's Assist Character.