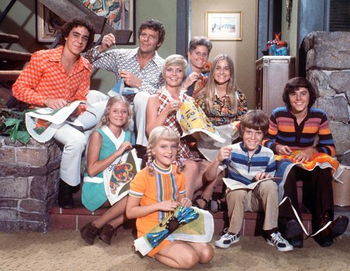 Just your average suburban family who are a lovely bunch.
"It was about a family that argued a lot and the dad was always wrong. You heard the audience laugh, so you knew it was funny."
— Monk synopsizes The Cooper Clan, a fictional example of this trope
Advertisement:

A contraction of "Domestic Comedy", a Sitcom which revolves around home and family.

You're going to see some standard jokes in most of these. Usually, the "wacky" differences between age groups and genders, perennial 'rebellious teenager' issues (including frequently erroneous stories about what kids are like these days), kids doing the darnedest things, and visits from the wacky neighbor.

Although most of the characters in your standard Dom Com will be blood relatives, don't expect them to bear more than a passing resemblance to each other. In fact it's so uncommon for family members to look alike on TV we even have a trope for when they do. There's even a long-standing tradition in any show with more than three kids for at least one of them to look absolutely nothing like any of his or her parents or siblings.

The Dysfunctional Family sitcom began as a deconstruction of this genre, but since so many appeared in the late 1990s, and modern versions tend to reconstruct many of the old tropes, there's not much of a distinction any more.

Not to be confused for a Sitcom with dominatrices involved.

Examples: Radio and Radio to TV