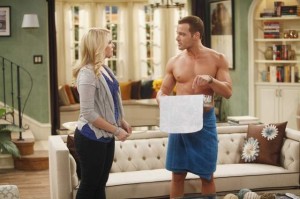 Guess which one's the nanny?
Advertisement:

Melissa & Joey was a 2010 Sitcom that aired on ABC Family. It starred Melissa Joan Hart and Joey Lawrence as the two titular characters.

Local politician Mel Burke is a former Hard-Drinking Party Girl turned politician who must take care of her niece and nephew, Lennox and Ryder, after their mother is arrested and their father goes on the run for a ponzi scheme the father, Lewis Scanlon, pulled. Joe Longo is a former employee of Scanlon who was left broke, jobless and publicly shamed in the wake of the scheme, despite having known nothing about it. Unable to find work due to his tarnished name, Joe hits rock bottom after his wife leaves him, and confronts Mel during one of her public addresses.

Mel, who is struggling to handle both her demanding job and two unsettled teenagers, ends up hiring Joe as a live-in nanny. While they initially clash, Mel and Joe grow closer as they essentially raise Lennox and Ryder together, and are often mistaken as being a couple. They eventually admit their feelings for one another and end up married at the end of the third season.