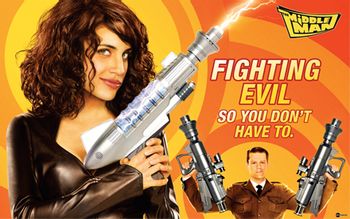 "...an over-the-top, sixteen-car-pileup-sugar-popped-cereal-bowl of a series that's not afraid to be everything your mother warned you about television: a cartoonishly extreme, randomly fantastic, special-effects laden, three-fisted walking-and-talking toy-line advertisement of an action-adventure-sci-fi comic book in which the fabric of reality barely survives in the end, and the journey invariably reveals a completely surreal strangeness behind everything we hold to be true."
— Javier Grillo-Marxuach's original pitch for The Middleman.
Advertisement:

Originally a comic book (that itself started as a television pitch), Javier Grillo-Marxuach aptly adapted it for a surprisingly faithful series that had one season on the increasingly inaccurately named ABC Family. The season was originally intended to be thirteen episodes long, but was cut to twelve for budgetary reasons (and still managed to end on a satisfying note). The script for the never-filmed thirteenth episode, titled "The Doomsday Armageddon Apocalypse," debuted in a table read at Comic-Con '09 with almost all of the original cast, and was released as a graphic novel shortly thereafter. Later another graphic novel and table read was released for a crossover between the comic and television series that resolves the mystery of what happened to Wendy Watson's missing father in both dimensions