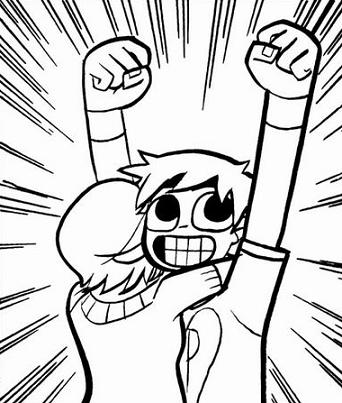 The moment when two characters become an Official Couple.

There may have been Unresolved Sexual Tension earlier, romantic feelings on either side or even an unmistakable Held Gaze or two, but that was all on paper. This is it, the actual relationship. It's happening, starting now. In a work, it's that point where until further notice there's no more sense in asking Will They or Won't They?. In Real Life, it's that point beyond which you'd feel justified calling the other person "my boyfriend/girlfriend".

This is the kind of plot development that gets an audience's attention, so it is often seen in parts of the plot where it is imperative for the story to do just that (e.g. in delivering a Plot Twist or a Cliffhanger, or as a cherry on top of the series Grand Finale). If the relationship was a major source of tension in the work, and the writers don't plan for introducing a new source of this nature instead of the one they just blew apart with this big bang of a payoff, they might find out the audience is not as interested in the story any more.

Most commonly broadcasted with a First Kiss, but every once in a while you find a more… drastic variant (Glad-to-Be-Alive Sex comes to mind). Compare Relationship Reveal—a moment where an implied but existing couple becomes canon. A move from casual to serious can involve I Got You a Drawer. Also compare They Do—the point past which the Romance Arc is concluded and the relationship becomes a constant that feeds other plot threads. Contrast Derailing Love Interests— where a relationship downgrade happens to a Romantic False Lead so an Official Couple can be hooked up. Though they often coincide (e.g. in a Last Minute Hookup) the two are far from synonymous; a Relationship Upgrade can be the beginning of hardships, trials and tribulations that the relationship may not survive at all.

Not to be confused with characters upgrading their abilities by socialization.

Cricket reaches Gabriella on the bus and reveals his feelings for her; she reveals her feelings for him as well, and they officially become a couple.

Cricket reaches Gabriella on the bus and reveals his feelings for her; she reveals her feelings for him as well, and they officially become a couple.