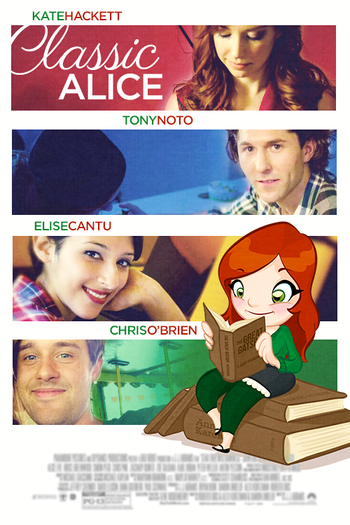 is a dramedy web series by series star & creator, Kate Hackett. It is the story of Alice Rackham, a college student with a huge drive to succeed. When she gets a bad grade on an essay because she isn’t emotionally connecting to material, she decides to show up her professor and live her life according to classic novels. Her friend, Andrew Prichard, uses the opportunity to make a vlog-style documentary about the process, and together they create ''Classic Alice’'. The show is also told 'transmedia style', all of which can be found here: The Narrative

, which seems like a perfectly reasonable book to start on... (shifty eye). They venture through Pygmalion

, The Wind in the Willows

. Books 2-7 also had an overarching plot that mirrored themes in Bronte's Villette.

The show began with weekly vlog-style episodes shot in Alice's bedroom; the first six episodes acted as a pilot to gauge fan interest. Beginning with the second book arc, Pygmalion, vlog-style episodes on Tuesdays were followed by short reality TV-style confessional videos that took us beyond "just" Alice. With Walden (and a second crowdfunder), the CA team expanded beyond the traditional 'vlog style' camera and played around with a more documentary feel - the characters don't always necessarily know that they are being filmed, which marries the feel of the vlog to a 'real' TV show or film.

Because Classic Alice follows a ton of stories, it pulls in a ton of different little arcs while playing with its major storyline - that of Alice, her writing, and where Andrew may or may not fit into that picture.