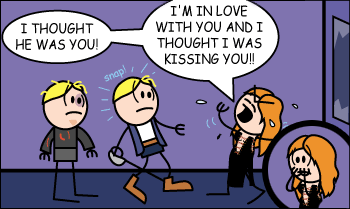 "In vain have I struggled. It will not do. My feelings will not be repressed. You must allow me to tell you how ardently I admire and love you."
— Mr. Darcy, Pride and Prejudice
Advertisement:

Love is a funny thing. Sometimes, we feel the strong need to keep our love secret from the object of our affection, for various reasons. They could still be attached, they may consider us a "best friend" and we don't want to endanger it, or maybe we just haven't come to terms with our feelings. The attempts that we have already made were all suddenly interrupted. The fear of rejection is also a powerful deterrent to spilling your heart out.

Thank God there are extraneous factors that force us to shout our love to the heavens after we've been pushed around. Otherwise, how would romance work?

Anguished Declarations of Love are gender-neutral in terms of occurrence but have a different flavour depending on whether the declarer is male or female: a male declarer will often be aggressive and reproachful in his confession, especially if his target of affection doesn't react the way he expects them to, in which case he may demand to be loved back. If the answer is positive, Manly Tears of Joy are never far. He's also more likely to deliver the declaration in a Balcony Wooing Scene. A female declarer is often much more subdued in her confession and will admit her feelings sheepishly but a lash out isn't unheard of. Expect said lashing out to be rather teary, even heart-wrenching if done well.

These kinds of confessions and proposals have a low success rate. When they come halfway through a work, they must usually be repeated again at the climax so that they can be accepted.

Be warned: deathbed confessions of undying love all too often turn out not to be actual deathbeds. There is a very real possibility you will live to face the consequences of your confession. This may be a Good Thing or a Bad Thing.

In real life, it's probably a much better move to just, y'know, ask someone on a date and see where it goes from there.

Beware! MANY spoilers, either marked or unmarked.

After a series of mishaps and misunderstandings, Oliva lays it straight to Leon about what she means to him.

After a series of mishaps and misunderstandings, Oliva lays it straight to Leon about what she means to him.