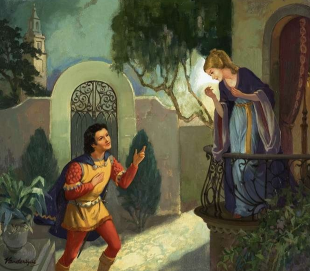 David: No, wait... Can we meet after work?
Fatima: Our families hate each other...
David: I don't care. Let me come to your balcony tonight to annoy your parents and neighbors by singing you a really overdramatic song about feelings and love.
— West Bank Story
Advertisement:

A would-be lover calling up to his desired paramour's bedroom window or balcony, in order to win her attention/affection. Often the scene will begin with the lover on the ground throwing pebbles at the window of the paramour inside. The device is used to convey a distance between the two parties, either imposed or due to lack of interest on the recipient's end.

This scene demonstrates despair of the caller as normal channels of communication are either not working or out of reach. This often occurs with teenage characters whose movements are restricted. When this trope is employed, the couple's chances are doubtful as there are usually significant obstacles to their being together. May double as an Anguished Declaration of Love if it occurs at a climactic point in their relationship. If the lover on the ground's performance is especially elaborate, or if he went through hell just to get to the balcony, it's also a Grand Romantic Gesture.

This trope may have its origins in the ideal of Courtly Love, which idealized chaste courtship from afar. However, this is often subverted by having the lover on the ground climb in through the window, allowing a less chaste relationship. Because of this history, in most cases the character in the window is female and the one on the ground is male, though other gender combinations are possible.

Often overlaps with Serenade Your Lover if the caller sings or performs a song, and Playing Cyrano if one is under the balcony or otherwise hiding nearby. Many modern executions instead have the lover on the ground holding a boombox over his head, as a Stock Shout Out to Say Anything....

This is an Undead Horse Trope.

Not to be confused with Balcony Speech, where a politician gives a speech from a balcony. Rarely overlaps with Balcony Escape, when a character escapes a room by moving laterally across balconies.