Theatre / Me and My Dick 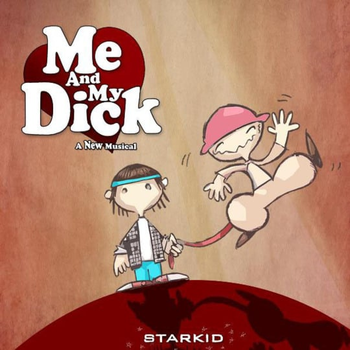 "People say it's quite unlikely
The two of us should stick
But I just tell them,
'Hey! It's me and my Dick.'"
Advertisement:

From Team StarKid, Me and My Dick is about a boy, Joey Richter and his dick, Dick. Joey apparently lives in a universe where people can talk to their body parts, and naturally as a teenaged boy he mainly listens to his Dick. Joey pines for Vanessa, the most beautiful Jewish girl at his school, while not noticing that his best friend Sally is head over heels for him. Things seem to be looking up for him when Vanessa breaks up with her long-time boyfriend and invites him over to her house to "study." However, when he gives Sally a tight hug, Dick is introduced to Sally's Miss Cooter and it's Love at First Sight. Now Dick can't get it up for anyone but Miss Cooter and it puts Joey in a rough patch.

The musical ran from the 29th to the 31st of October, 2009, at a student theatre on the University of Michigan campus. It was posted to YouTube in its entirety on November 12, and the soundtrack was released for purchase via iTunes on March 9, 2010. The soundtrack debuted at #11 on Billboard's Top Cast Albums chart a week later. And for point of reference, also in the top 15 for that week were Cast Recordings for Avenue Q, Mary Poppins, Mamma Mia!, Annie, Hair, The Phantom of the Opera, The Lion King and Wicked.