Web Video / A Trailer for Every Academy Award Winning Movie Ever 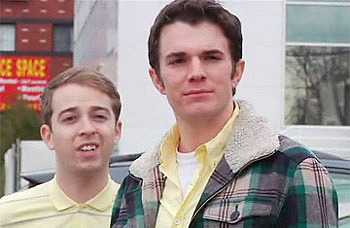 Tagline! note Note!
"Explicitly summing up the moral of the story,
awkwardly working in... the Movie Title."
— Page quote
Advertisement:

Wealthy, Successful Protagonist (Who Is Handsome) seemingly has it all: wealth, success, good looks, a gorgeous metropolitan home, the works. But, as his Insightful Best Friend points out, he doesn't have something to live for that's bigger than himself.

Things start looking up once Wealthy, Successful Protagonist meets Lead Female, a quirky, daring young woman who rejects social norms by dyeing her hair, and admires him for undertaking this responsibility. The two of them soon start dating, and Wealthy, Successful Protagonist learns to appreciate the positive impact Inspirationally Disadvantaged Guy has on his life, and all seems well.

Then things get... complicated. Aside from dealing with his increasingly-rocky relationship with Lead Female and Inspirationally Disadvantaged Guy's failing health, Wealthy, Successful Protagonist must also confront the machinations of a traitorous associate, inspire a young Latino boy to do well in school, defend an innocent black man in court, fight with the Native American metaphor against the American military metaphor, and help a local high school basketball team win the Big Game.

On the meta side of things, it's a hilarious send-up of Oscar Bait movies in general by the folks at BriTANicK.com. Given how its entire purpose is to hang a gigantic lampshade on such films, it's not surprising how incredibly Troperrific it is for a video that's only three and a half minutes long.

First posted on Cracked, you can watch it on the creators' Youtube Channel

. Created by Brian McElhaney and Nick Kocher in 2010.