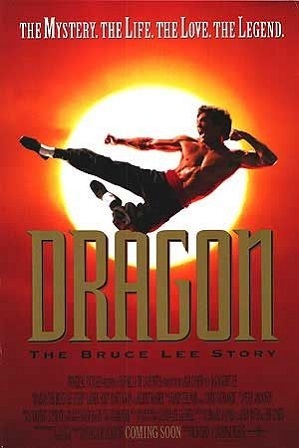 "The key to immortality is first living a life worth remembering."
Advertisement:

A 1993 loose Biopic of Bruce Lee, Dragon: The Bruce Lee Story tells of the legendary martial artist and movie star as he deals with his duality as continuing a strong Chinese heritage while embracing his identity as an American. Jason Scott Lee (no relation) plays Bruce, Lauren Holly plays his American wife Linda and Robert Wagner plays Hollywood producer Bill Krieger.

The movie opts for a slightly fantastical subplot of a demon haunting his family in their nightmares and their efforts to fight back. As expected, there are liberties taken with the actual history and timeline of Bruce Lee (his book on Jeet Kune Do was never published in his lifetime), but the film pays an honest tribute to how revolutionary a man he was and his influence in both the East and West.

A year later, it received a Licensed Game available for Sega's consoles, the Super Nintendo Entertainment System, and the Atari Jaguar. It contextualizes the story as a series of fights inspired by Bruce's films and personal life, as well as introducing a metaphysical villain known as the Phantom, representing Bruce's fear of death. Interestingly, it utilized three-person multiplayer, each player controlling a clone of Bruce.

"Three weeks before the opening of Enter the Dragon, the movie that would bring him into international fame, Bruce fell into a mysterious coma and died. He was 32. Thousands of fans have gathered in Hong Kong for the funeral. I buried him in America so he can be close to us. There are many people that want to know the way he died, I want to remember the way he lived."