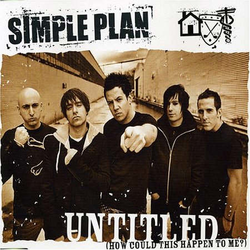 An "untitled" title with a titled subtitle.
"But the title IS Untitled. See? It's me being ever so clever."
— The Professor on Untitled Magic: The Gathering Podcast
Advertisement:

Rather than a work truly having No Title, the work officially has a title that SAYS the work lacks a title. By definition, all examples of this DO have titles which are thus technically inaccurate.

Often this is done to evoke the "unprofessional" feel of a work with No Title while still having the convenience of being able to refer to the work by name. It is also common for these titles to start out as placeholders that were never changed to something else, either from a lack of time or because someone liked how the placeholder sounded. "Untitled" is the most common form, but any name for the work which says it lacks one counts.

Compare You Know the One, where a person or plot element is always referred to in a cryptic way to keep the information from the reader, and Speak of the Devil, where a character is never named because people fear the name.

open/close all folders
Anime and Manga
Film
Literature
Advertisement:
Live-Action TV
Music
Note: Any song or album intended to truly be untitled will be this by default (or sometimes, in the case of the latter, self-titled) when released digitally due to technical restrictions. Only add examples in which "Untitled", or variations thereof, is clearly supposed to be its name.
Video Games
Webcomic
Web Original
Websites
Western Animation
Real Life