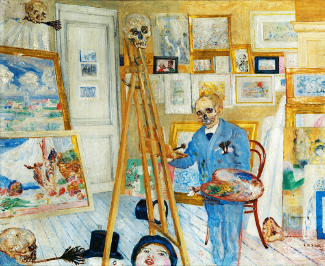 ...not quite what we meant.note James Ensor, The Painting Skeleton
"The overwhelming prerequisite for the greatness of an artist is that artist's death."
— Thiessen's Law of Art
Advertisement:

The vast majority of shows that mention paintings will mention this trope at one point: Artists are never recognized until after they're dead. Though this has happened in many cases, there have also been a lot of painters, modern and classic, that have been recognized while still alive. Nor has the deceased been recognized immediately after his corpse hits the ground, as it seems to happen when this trope is in effect. (Historically, this has affected composers and writers far less than people assume. Shakespeare was successful during his lifetime, so was Beethoven. It stands to reason - only a few people would continue doing something for a long time without some kind of success. This is glaringly obvious for composers - of the top tier, only Bach and Tchaikovsky comes even remotely close to this trope, and they were still far from starving during their lifetimes.)

In theory, the idea that dead artists are better may result from them dying at their peak: they don't have the time to taint their earlier successes with an Audience-Alienating Era of divisive later works that fail to live up to the masterpieces (whether through being too different or more of the same). The artist's death also introduces scarcity, as it means there will definitely not be any more works produced by the artist, making existing ones more precious.

In 99% of the cases where this trope is mentioned, one character, either the artist or an associate, will come up with the "brilliant" idea of spreading rumors of the artist's death, which immediately causes said artist's work to magically get the recognition that eluded it all these years. Of course, something inevitably goes wrong, the artist is found to be alive, and the status quo is restored. For some reason, fraud accusations are seldom made.

See also Vindicated by History, True Art Is Ancient, and Short-Lived, Big Impact. When a musician's death or departure leads to their group doing better than before, it's an aversion of The Band Minus the Face. When a dead artist is celebrated (through song), it's a Celebrity Elegy. Such celebrities are good candidates to hang out in heaven. Many examples below also fall under Never Speak Ill of the Dead, in that some artists who became greatly celebrated after their death lived miserable and/or ridiculed lives before dying. Compare Posthumous Popularity Potential, which entails real-life artists seeing a boost in popularity/recognition after their death.

Discussed. Jinx is meeting with a surgeon on the Cuban island, discussing a drastic procedure to change her looks. He says that he considers himself an artist, and she remarks that most great artists aren't celebrated until after their deaths, upon which she shoots him.

Discussed. Jinx is meeting with a surgeon on the Cuban island, discussing a drastic procedure to change her looks. He says that he considers himself an artist, and she remarks that most great artists aren't celebrated until after their deaths, upon which she shoots him.