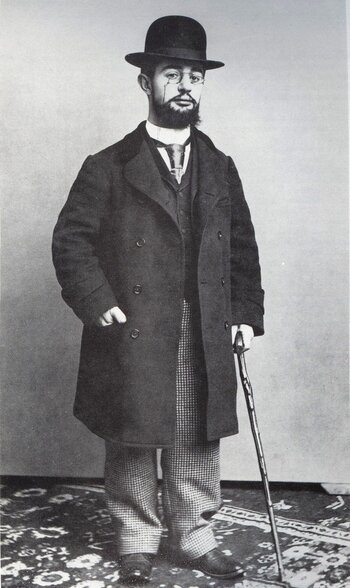 Henri de Toulouse-Lautrec (born Henri Marie Raymond de Toulouse-Lautrec-Monfa; 24 November 1864 – 9 September 1901) is one of the most famous late 19th century French painters and illustrators. His is best known for depicting life in 19th century Paris, particularly at the famed Moulin Rouge nightclub/brothel, where he was a permanent resident.

Toulouse-Lautrec is one of the most recognizable painters, due to his short height. Many people assume he suffered from dwarfism, but in reality he struggled with congenital health conditions, worsened by him breaking both his right thigh bone at age 13 and his left a year later. The bones never healed the way they were supposed to, and even as an adult he was only 4 foot 8/ 1.42 m high. Despite being born in an aristocratic family his grotesque appearance made him an outcast and he went on living a bohemian lifestyle in Parisian night clubs, cafés and brothels. As a result popular culture often depicts him as some kind of Depraved Dwarf, but in reality he was a troubled artist who only felt accepted in the sleazy, decadent nightlife of the French capital. He drowned his sorrows in alcohol and absinthe, while making some of the most elegant and colorful posters, lithos and paintings ever made.

Toulouse-Lautrec was a personal friend of many other artists of the time, including Vincent van Gogh, Édouard Vuillard and Oscar Wilde. He is also an example of Short-Lived, Big Impact, being only active for about 20 years and dying at age 36 from the effects of alcoholism and syphilis.