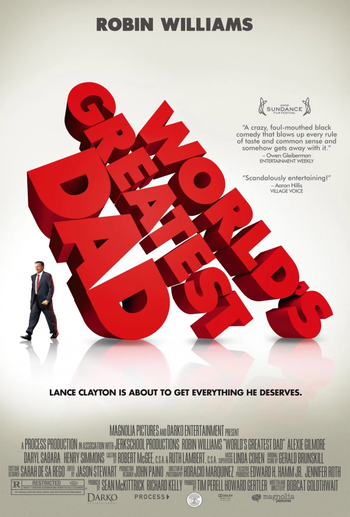 Robin Williams is Lance Clayton, a poetry teacher—but unlike John Keating, his class is very unpopular and he does not inspire his students at all. He is also a struggling writer who has not been able to get anything published. His girlfriend, Claire, is a pretty young art teacher, but she's reluctant to make their relationship public and seems to be spending a lot of time with the handsome and charming English teacher Mike. And as if all that wasn't bad enough, his son, Kyle, is a surly, porn-obsessed, misogynist, Jerkass.

Much like Psycho, most of the film's plot is driven by a Spoiler that happens early on in the film.

This film was made in 2008 and opened at Sundance in early 2009, and is now on DVD and Blu-Ray. It was directed by Bobcat Goldthwait, who also directed Shakes the Clown (in which Robin has an uncredited cameo) and Sleeping Dogs Lie, a romantic comedy where a girl reveals she fellated a dog in college and her relationships start to fall apart (We don't make these things up, folks