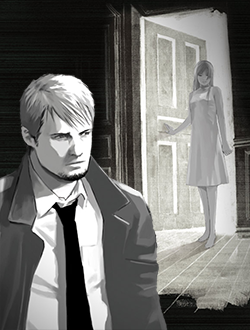 "Mr. Hyde, I must ask you again. Who are you?"
"Like I said, pal. Just a salesman."
Advertisement:

Hotel Dusk: Room 215 (Wish Room: Angel's Memory in Japan) is an Adventure Game/Visual Novel for the Nintendo DS released in 2007. In it you play as an ex-cop, Kyle Hyde, who arrives in a small hotel in the middle of nowhere — the eponymous Hotel Dusk. Kyle left the force after shooting Brian Bradley, his former partner who betrayed him and joined a criminal syndicate. Bradley's body was never found, but Kyle is sure that Bradley is alive and is searching for him, hoping to understand what happened.

Kyle soon runs into the staff and residents of the hotel. There's the initially bratty kid with her father, an old lady who wears an eye patch, a girl wearing white who doesn't speak, and many others. All have tragic secrets hidden in their pasts, which is not a surprise in a game like this, and these secrets start to lead Kyle closer to finding Bradley.

The game can be played almost entirely with the touch-screen of the DS and, in some of the puzzles you have to solve, uses some of the more unconventional abilities of the machine (remember that puzzle in The Legend of Zelda: Phantom Hourglass that took you an hour to solve? Hotel Dusk did it first, and twice). You move around the hotel as Kyle, pick up things and speak with other characters, asking them questions. The game is divided into ten chapters, each culminating in interrogation of one of the characters. A game over can result by asking the wrong questions or by being caught doing something you shouldn't do. (It is a hotel, so you shouldn't wander around in the kitchen or other areas marked 'Staff Only', but usually this just gets you some angry looks. Lucky you.)

Visually, backgrounds are in 3D and fully coloured, but the characters are in 2D and most of the time black and white. There is no voice-acting, but background music is on most of time and different characters and situations have their own theme-tunes.

A sequel was released in 2010 titled Last Window: The Secret of Cape West, again featuring Kyle, now in Los Angeles in 1980. It was developer Cing's last game, and outside of Japan it was only released in Europe, which is ironic seeing as to how the game is set in L.A.

The Another Code series takes place in the same universe, twenty-five years later.

Received what seems to be a Spiritual Successor in 2016, Cold Case Investigations - Distant Memories, which received a surprise localization

, continuing the series' legacy of narrowly avoiding complete No Export for You.

open/close all folders
Tropes A to H
Tropes I to Q
Tropes R to Z
I've got myself a paper clip!