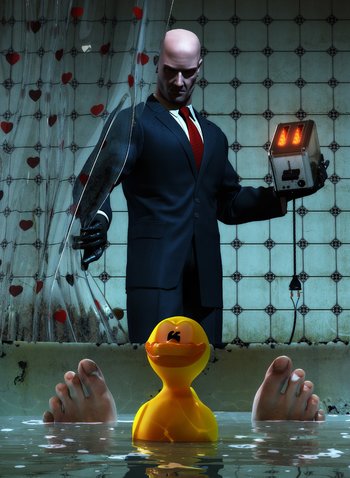 Shocking. Positively shocking.
"If there's one thing I know about radios and dryers, you never use them around baths or showers!"
— Louie the Lightning Bug

Someone drops a mundane electric appliance (classically a toaster) into a bathtub or other pool of water lying around. A classic way to attempt murder or suicide in the movies.

Fictional depictions are much flashier than the real thing, with arcs of electricity and bright flashes many seconds long and the complete shorting-out of electrical service to the entire building. In Real Life, though, the resulting electric current is momentary and nearly invisible and likely would just trip the nearest circuit breaker or fuse — but grabbing the electric device while in the bathtub would be just as lethal in real life as the trope is in fiction. This is also a victim to Technology Marches On. It was much more common in the past when most bathtubs had copper piping; however, as more and more homes have PVC plastic plumbing, most tubs aren't grounded and electrocution is less likely (not to mention that newer building codes generally require GFCI outlets for bathroom use, which sense when this is happening and cut off power before any serious damage occurs to either you or the appliance).

This, and other forms of electrocution, is more likely to be fatal where the mains voltage is 220V — the power output for a given impedance, e.g., that of a human body, goes as the voltage squared, meaning 4 times the power at that voltage as at North America's 110V.

Just one of the many ways that a character can die in a bath.

This is a Subtrope to High-Voltage Death.

NOTE: Since this trope can lead to a character getting killed, expect spoilers below.

During a battle with Ernie, the Angry Video Game Nerd takes him out by tossing him in a bathtub with his Nintendo console, modified to resemble a toaster.

During a battle with Ernie, the Angry Video Game Nerd takes him out by tossing him in a bathtub with his Nintendo console, modified to resemble a toaster.