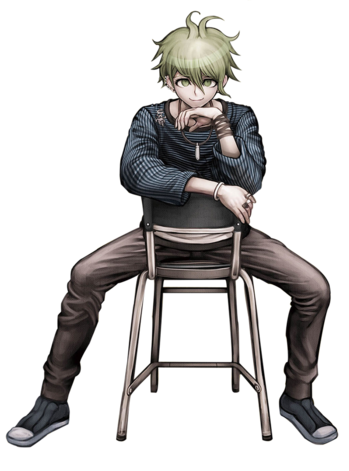 "NO, LOOK. IT'S CASUAL AND RELAXED. LIKE, IT VISUALLY CONVEYS THAT MY PRESENCE IN THE CONVERSATION IS HUMBLE AND NONTHREATENING, YET FRANK AND ATTENTIVE."
— Karkat Vantas, Homestuck
Advertisement:

So... (turns chair around and sits) you're trying to Describe Edgy Backwards Chair Sitting Here.

Chairs are made to sit on. When most people sit on one, they usually lean their backs against the backrest and their legs forward. However, there is a more unusual way of sitting on one.

There are many different reasons why a person would choose to sit this way. Not unlike wearing a baseball cap backwards or sideways, it could convey that the character is edgy but still approachable, slightly rebellious but not destructively so, to appear carefree or too bored to care, or too calm and collected to make a big deal about things, giving off a "cool" vibe, though it may backfire and give the appearance of looking Totally Radical instead. Alternatively, those who sit this way can try to use the back of the seat as a type of shield, so they can appear cool while clinging to the back as a form of protection to cover their insecurities.

If they simply want to talk to the person behind them without bothering to turn their seat around, it is not this trope. Typically seen in places where people congregate, such as think tank meetings or support groups.

A Sub-Trope of Characterizing Sitting Pose. A Sister Trope to Rebel Relaxation and Leaning on the Furniture. Compare Slouch of Villainy. See also Human Furniture Is a Pain in the Tail for another reason a character might want to sit in a chair backwards.

Also keep in mind that there is a narrative point to sitting like this, unlike merely sitting on a chair.