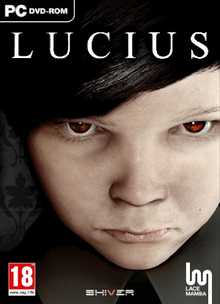 Lucius is a 2012 horror/stealth video game for PC.
Advertisement:

Lucius Wagner was born on June 6, 1966. Despite this, nobody expected him to be anything other than a normal boy. Of course, he's the Player Character in a Video Game, so that was never going to happen. On the day of his 6th birthday, Lucius kills Mary, one of the household maids, by locking her in a freezer.

Of course, Lucius then discovers that he is excessively not-normal: that night, he is contacted by the Devil Himself, Lucifer, in a dream. Lucifer reveals that Lucius is The Antichrist, and orders him to begin gathering power by murdering all the people in the manor. Gameplay is something of a stealth/puzzle mishmash, as you investigate your latest victim and figure out how to use Lucius' various powers (telekinesis, limited mind control, etc), or perhaps just cunning and wits, to Make It Look Like an Accident. And there's always the possibility that Lucius' father, Charles, or some other characters might suddenly become Genre Savvy...

A sequel, Lucius II: The Prophecy was released on February 13 (on a Friday, no less), 2015. Taking place directly after the events of the first game, Lucius now has an entire hospital as well as a small town to wreak havoc on as well as contending with another son of the devil.

A demake of the first episode, simply titled Lucius Demake, was released on August 9, 2016. It was intended as a smaller project before the third episode entered production.

The third game, Lucius III, was released in December 2018. In it, Lucius attempts to fulfill his destiny of bringing for the Apocalypse.