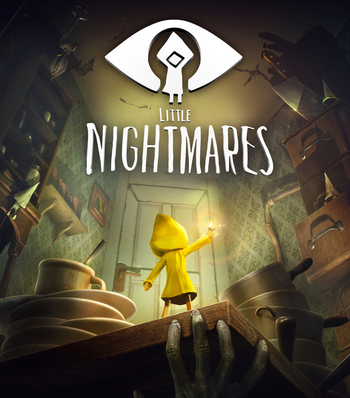 Play with your childhood fears...
Advertisement:

Little Nightmares is a strange, dark, and haunting Horror Puzzle Platformer (similar to Limbo or INSIDE), developed by Tarsier Studios and published by Bandai Namco Entertainment. It was released on the PS4, Xbox One and Steam on April 28, 2017. A Nintendo Switch port was released on May 18, 2018, and it includes DLC released earlier.

The game stars a very small barefoot girl in a yellow raincoat named Six, who travels through a strange, unnerving, dark, and massive structure that is hidden below the waves of the ocean and filled with a variety of different rooms of various shapes and purpose. It is known as the Maw.

Of course, she is not the only inhabitant of this dark building. Alongside her are small, friendly, mushroom-like creatures called Nomes that seem to hide from the various Monstrous Humanoids, ranging from the Janitor and Twin Chefs who are respectively tasked with capturing and cooking children, to the gluttonous guests of the vessel who seem rather intent on devouring her and who knows what else, and the Lady, the supreme leader of the Maw who runs the operation. The girl, using her wits alone, must survive the awful things in her way, and aid the Nomes as she makes her way through the various rooms.

A three-part DLC titled Secrets of the Maw stars the Runaway Kid, a boy in a blue shirt and an ankle shackle also trying to escape from the Maw around the same time as Six. The first chapter, The Depths, was released on July 6th, with the second chapter, The Hideaway, on November 10th, and the third and final chapter, The Residence, released on February 23rd, 2018. Very Little Nightmares, a puzzle adventure Prequel game for mobile devices was announced in April 2019 and released in May 2019. Additionally, six motion comics have also been released on the app store for IOS and Android that serve as a prequel to Little Nightmares II, and a comic book adaptation that planned on greatly expanding the game's world was begun but was unfortunately canceled.

The game's follow-up, Little Nightmares II was announced at the 2019 Gamescom and was released on February 11, 2021.

is reportedly in the works, directed by Henry Selick of Coraline fame.

For tropes applying to specific characters, sneak into the character page.

Little Nightmares brings your fears to life with the following tropes:

Example of:
Evil Is Not Well-Lit