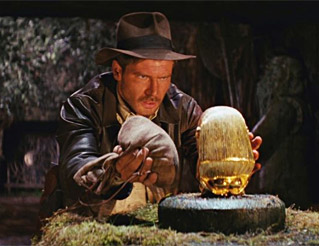 If you're an Indiana Jones fan you probably know the scene by heart. After dodging one Booby Trap after another on their way through the Temple of Doom, the hero approaches the MacGuffin he's spent the past few hours searching for, neatly resting on a pedestal and seemingly unguarded. It's tempting to grab it, but somehow he knows it's not that easy.

The prize, you see, is resting on a Pressure Plate, and removing the payload would most likely set off yet another trap. So he ever so carefully swaps it with something of equal weight, and the trap is none the wiser. (Just as often if not more, though, the trick fails and the trap goes off anyways so the audience can see their action escape sequence.)

Like Indy Hat Roll and a handful of others, just about every instance of this trope is a Shout-Out to the famed adventurer (see Raiders of the Lost Parody). See also Land Mine Goes "Click!" when the "treasure" is a fellow human being. Compare with Replaced with Replica.