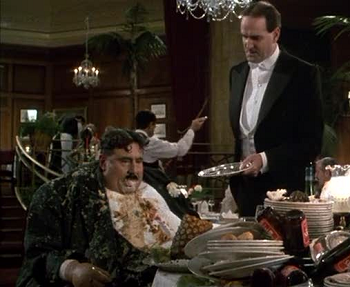 "We all know William Howard Taft kept a bowl of live frogs by his resting slab in the Oval Office that he would occasionally snack on during meetings. We all know the Oval Office was originally round. The bloggers of the day would never let him forget it."
— More Information Than You Require, "Humanizing Detail on William Howard Taft"
Advertisement:

It is an unspoken agreement in polite society that the proverb "You are what you eat" not only applies literally to what you are eating, but also how you actually consume the food. What better way, then, to show that a powerful (usually fat) and important person is a corrupt villain by having him greedily wolf down food with loud slurps-burps-slobbering, in a manner more befitting of a pig than a gentleman of his status?

Bonus points of villainy if the food is meant to be "fine" gourmet food that would cost the month's wage of a poor person to buy. It takes an epically repulsive villain to make the very consumption of fine foods a disgusting act to behold. If the character is a Gasshole, expect plenty of belches, or at least a very loud one.

This is an Anvilicious trope criticizing wastefulness of the rich and corrupt. It is as old as cinema itself, starting back in the Two-Fisted Tales days. Also commonly found amongst The Mafia and the occasional Nazi of four-colored comic books.

Also see Adipose Rex. Can overlap with Villainous Glutton. Compare Uncleanliness Is Next to Ungodliness, where general lack of hygiene correlates with villainy. Contrast Too Hungry to Be Polite, when hunger rather than villainy causes someone to forget their table manners.