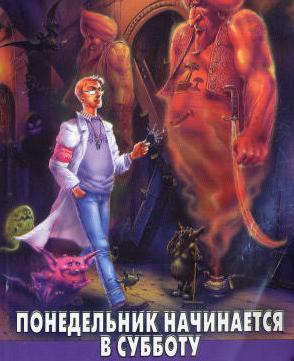 He should really be more careful with those keys...
Advertisement:

Monday Begins on Saturday (Russian: "Понедельник начинается в субботу") is a 1964 novel, one of the most beloved works by the Strugatsky Brothers. A mix of fantasy and science-fiction, it tells the stories of a Soviet research institute dedicated to studying magic and the supernatural, the dedicated scientists who work there, and the wide variety of monsters, ghosts, and other critters that they study and work with. Adapted into a two-part Christmas special back in the early 80s. It's a fun movie in its own right, but it has very little to do with the novel it's supposedly based on (which annoyed the Brothers quite a bit at the time).

Was followed by a much more cynical Tale of the Troika just three years later.