Uncleanliness Is Next to Ungodliness 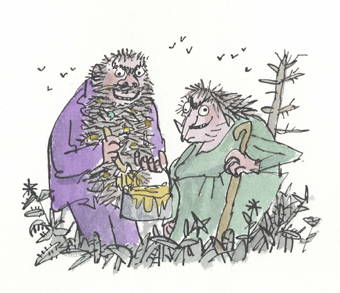 As rotten on the inside as they smell on the outside.
Cody: Zack is selfish!
Mr. Moseby: Spencer's a bully!
Cody: He doesn't listen!
Mr. Moseby: He has no consideration for me!
Cody: And he stinks—personality-wise and frankly, his body odor!
—The Suite Life of Zack & Cody, "Moseby's Big Brother"
Advertisement:

Appears mostly in works of fiction designed for children (and some for adults). But whenever the habits/daily life of the bad guys (either the Big Bad or their mooks) are shown, they tend to be absolutely disgusting, to the point where anyone living like that should contract several diseases, including leprosy and the plague, unless they die from food poisoning first. Usually these are Informed Attributes, but occasionally shown to make the bad guys really seem all the more disgusting (although sometimes they may come off as cool, especially if they're pandering to the preteen boy crowd.)

The trope showed up first (at least in the West) in Regency times, or about the time that the urban middle classes first had access to safe, clean running water. This is not a coincidence in the least. Before safe water was available, taking a bath really was more dangerous than remaining dirty. People who bathed were quite literally risking their lives to be clean - a sign of wicked vanity at the time. Compare that to people using Botox (a byproduct of a deadly bacterium, and one of the most lethal toxins on earth when uncontrolled) without even considering the -tox suffix.

See also Evil Smells Bad (a more supernatural version of smelling bad that can apply to things and places, not just voluntarily unclean people), Jabba Table Manners. Compare Plague Master, a villain who isn't just unhygienic but who actively spreads diseases around, and The Pig-Pen, which is a filthy but not necessarily villainous character.

Compare with The Dung Ages, where everyone who wasn't a king lived like this (yes, even the lower rungs of the nobility). Contrast Creepy Cleanliness and Straight Edge Evil.