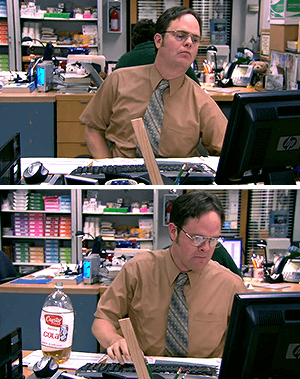 Deskwork can be draining, but don't drain at your desk.
"Tinkle, tinkle in a jar when the toilet is too far."
— Songdrops, "Tinkle Tinkle in a Jar"
Advertisement:

For one reason or another in the middle of the Potty Emergency, a toilet isn't available. Perhaps they're on a wacky road trip, perhaps they're locked in a room, perhaps they find the idea of urinating outdoors disgusting, they are very poor, or perhaps even because they refuse to quit playing a certain video game. Whatever the reason, a proper trip to a bathroom is not available. Instead, some other container, usually a jar, is offered. Usually, the person will protest and say they'll hold it.

If the person does use the Jar Potty, it'll be off-camera. The contents of the jar may be spilled on the person, with the phrase "I hope that was just water" or some variation therein.

This trope is almost always Played for Laughs. That said, use of jars, chamber pots, cans, and other non-flush/non-latrine "toilets" has happened pretty much until the advent of the flush toilet in almost all societies that did not practice cleanliness codes forbidding it, being the direct cause of epidemic/pandemic cholera and the spread of much other serious infectious diseases. There is a reason why latrines are generally situated away from water sources, why the flush toilet in societies with some degree of wastewater diversion/wastewater treatment, and/or chemical composting toilets being used to dispose of fecal matter are considered the greatest advance in disease prevention of human history; and the existence of proper toilets is literally central to the eradication of epidemics and pandemics. Using a jar or chamber pot or bottle or similar for urine only is relatively safe, though, as unless the user has a UTI or gonorrhea or schistosomiasis, urine is itself, while not perfectly sterile, is devoid of harmful to human health bacteria until exposed to it.

The most common people who partake in this practice in Real Life include:

open/close all folders
Anime & Manga
Comic Books
Fan Works
Film — Animated
Film — Live Action
Jokes
Literature
his mother used to force him to use the "Toity Jar" if he had to pee and they were in a hurry. He later learned that there were multiple Toity Jars, which she washed out and reused as necessary. Accidentally revealing this to his father (while he was eating peaches from one of the jars) is what ended the practice.
Live Action TV
Music
Theatre
Video Games
Visual Novels
Webcomics
Web Original
Western Animation
Feedback

The Princess, who has lost her voice, points to the potty, but the General gives her the bucket instead. So, she just pees in that.

The Princess, who has lost her voice, points to the potty, but the General gives her the bucket instead. So, she just pees in that.