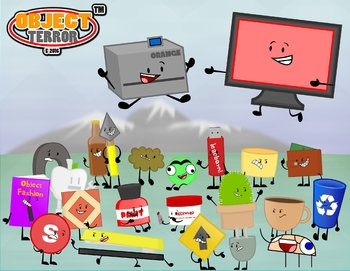 Object Terror is a Flash-animated cartoon series created by Brian Hazen for his YouTube channel, ShallotHare. It is one of the many cartoons on the web classified as "Object Shows", and has been one of his most well known works alongside The Tale of El Nudelo. The plot is your typical Game Show plot that comes with the standard object show package: 21 contestants compete in a game show hosted by Printer and co-hosted by Computer to win a giant cruise ship. Seems innocent enough...Wait, is that guy bleeding? But he's an ob... Ew!

Believe it or not, this Battle for Dream Island-inspired cartoon is basically a Subverted Kids' Show, if not a Sadist Show akin to Happy Tree Friends. Basically, the charactersnote who are humanoid creatures that look like objects, which explains a lot are doomed to suffer from being turned into a bloody pulp of Ludicrous Gibs for the sake of humor or horror. And there's plenty to be had in this show. In fact, the fourth episode is where things started to turn into a immoral, Deadly Game. Outside of that, this show also has characters swearing and, occasionally, making out.

And the funniest thing about all this is that the show wasn't always like this. The entire series started out more or less with the full standard kid-friendly object show criteria somewhere back in 2014 or 2015. At the time, Printer wasn't even a character and the show was instead hosted by Computer. In the second reboot (released in early 2016), it was more or less the same in spite of an Animation Bump, but then things changed in the third episode. The current version of the series started in late 2016. Those who have even heard of this show would agree that Object Terror is one of - if not - the most controversial object show to date.

If you are brave enough to even watch this show, then you are allowed to view this playlist for the second reboot

. Just watch it under your own risk and with caution, since it's very violent.

Tropes in Object Terror include:

Arch: You will never be as dank as my mommy! [Translated German according to subtitles]
Feedback

Stapler drinks a bottle of yellow fluid Computer gives her, thinking it was apple juice. Whipped Cream reads the label on his bottle, revealing the fluid to be Computer's urine. This causes Stapler to vomit unintentionally at Carpet in a green beam of puke.

Stapler drinks a bottle of yellow fluid Computer gives her, thinking it was apple juice. Whipped Cream reads the label on his bottle, revealing the fluid to be Computer's urine. This causes Stapler to vomit unintentionally at Carpet in a green beam of puke.