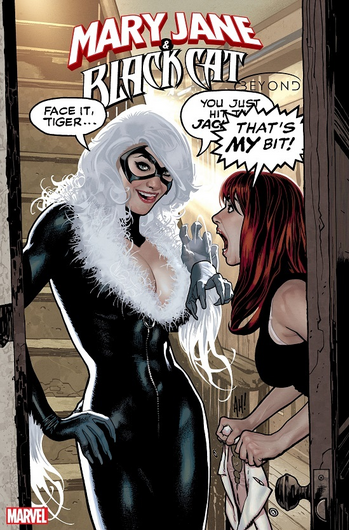 Hey, I was gonna say that!

Bob has a Catchphrase and is in a situation where it's appropriate to use it, but Alice was faster and stole the catchphrase. Bonus points for Bob saying, "That's my line!"

In Anime, it can also be used to mean, "I'm the one who should be saying that to you." For example, if Alice barges into a place where she's not supposed to be, and unexpectedly finds Bob (who is supposed to be there) and says "What are you doing here!?", Bob might respond with Watashi no serifu da!, "That's my line." (Of course, pronouns, construction, formalness, etc. varies. Listen out for the "no serifu" every time, though.)

This is something of a stereotype in the acting profession, where leading men/ladies have been known to pinch clever lines of dialog from those of lesser billing.

If the other character isn't able to notice, then it's a Borrowed Catchphrase.

Not to be confused with Whose Line Is It Anyway?.

Spidey himself rarely, if ever, gets to finish the line, which is internal dialogue in most incarnations. How has either of them heard it?

Reporter's "The day is saved"

Stanley Whitfield doesn't sound as good as the narrator does.

Reporter's "The day is saved"

Stanley Whitfield doesn't sound as good as the narrator does.