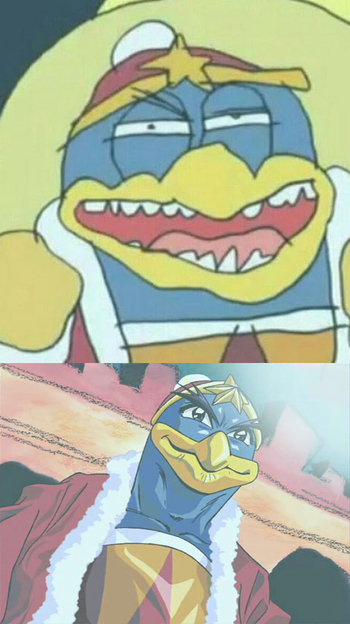 Too bad Dedede's contract said that the entire Show Within a Show had to be of a professional quality...
"I remember the boy Mowgli riding a black panther moving and acting in a clichéd way — until he got off. And suddenly everything changed. The drawing changed. The proportions changed. The actions and acting changed. The panther helped the boy up a tree and everything moved to a superb level of entertainment."
— Richard Williams (referring to Milt Kahl's Mowgli animation in The Jungle Book), The Animator's Survival Kit.
Advertisement:

Animation Bump, as the name implies, is when the animation quality of a work (usually a television or web series) suddenly improves for a certain scene or sequence. This usually manifests itself in the character animation, with body language and movement being more precise and fluid, and facial expressions being more stuble or detailed. However, it can also extend to other parts of the production: more detailed backgrounds, improved colorwork, more impressive dynamic effects such as fire and water, integration of CGI, etc. In the anime industry, this is called sakuga.

Creators usually put it into practice for pivotal episodes or sequences. This generally means season openers, season finales, and any cinematic moments or action scenes. You may also sometimes find that the pilot episode may have better animation as well, though this is due to it being treated more as a short film proof-of-concept than a single episode in a bigger production, though there are plenty of cases of cheaply-made pilots for that same exact reason. You can also expect any films based on the series to get the treatment, as those usually come with a slight budget increase as well (especially if the company decides the film is theater-bound). Also, the title sequence: it's the first thing the viewer will see, so you really want it to look as good as possible.

Why doesn't the show always look this good, you ask? At the end of the day, animation, even if you're doing Limited Animation, costs hundreds of thousands of dollars to producenote not counting studio overhead, a medium-budget American animated series averaged around $700,000 per half-hour in the 2010s, with higher budget (usually action/adventure) shows regularly breaking the $1,000,000 mark. Unless you're a big name whom executives unquestionally trust with a blank check, you have a budget the studio is holding you to, and thus need to plan out how those funds are going to be allocated smartly: i.e., what gives everyone and everything (the current audience, a new audience, the narrative itself) the most payoff.

Note: This is not meant to say that the rest of the animation for the works listed here is usually bad or inadequate, but only that there are moments that clearly had more attention and money fueled into them than others. Also, shows which have the animation split between several different companies depending on the episode can also fall into this simply because some animation houses have better staff than others; many cartoons made for syndication during the 80s and 90s, especially those produced by Disney and Warner Bros. during the 1980s an, are a prime example of this, with syndications.

This is the inverse of Off-Model, in which animation or art instead become worse than it usually is for a moment or even a whole episode. Compare Art Evolution where, at some point, the art or animation is permanently upgraded. See also Art Shift for when the whole style of the medium deliberately shifts during the course of the work, usually for dramatic or comedic effect.

If possible, make sure to credit the animators responsible for the remarkable entry. If you need help, Sakugabooru

is a good place to start looking. Keep in mind many animated sequences are not credited, and animators have to confirm which sequences they worked for.

Bingo and the Walking Leaf

When Bingo encounters a leaf bug in "The Weekend", close-up shots has Bingo's face drawn in higher detail and expressiveness.

Bingo and the Walking Leaf

When Bingo encounters a leaf bug in "The Weekend", close-up shots has Bingo's face drawn in higher detail and expressiveness.