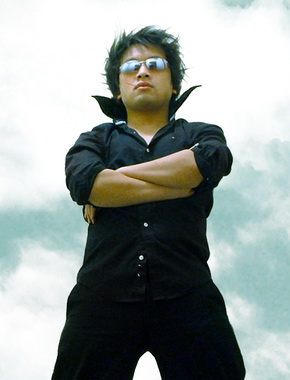 He chose being awesome as a career.
"I believe that the human spirit is indomitable. If you endeavor to achieve, it will happen given enough resolve. It may not be immediate, and often your greater dreams is something you will not achieve within your own lifetime. The effort you put forth to anything transcends yourself, for there is no futility even in death."
Advertisement:

Monyreak "Monty" Oum (June 22, 1981 - February 1, 2015) was an American web-based animator* and, though he preferred the term "film maker", "one-man production crew" would be more appropriate and writer. He was responsible for what has been deemed some of the most potently awesome Web Animation of his time, most of which relied on Rule of Cool.

Born in Providence, Rhode Island, Oum began making fan videos as early as 2002 after dropping out of high school. In 2007, he discovered reverse engineering techniques that allowed for the extraction of models from Halo 2, and using additional assets from Super Smash Bros. Melee, he made a video pitting a Spartan and Samus Aran together in an ultimate fight. The end result was Haloid, which gained significant attention online, as did Dead Fantasy, released the same year and revolving around a similarly epic fight premise that merged the worlds of Dead or Alive and Final Fantasy.

A mere two months after the release of Haloid, Oum was a highly sought-after name among game companies. While he would end up doing combat design and/or animation work for Midway Games and Bandai Namco Entertainment for several years (namely working on the latter's Afro Samurai game), he was ultimately frustrated by his experience in the industry. Oum then met Burnie Burns, co-founder of Rooster Teeth, in 2009, and his hiring by the company was later announced in 2010. The crux of his work was creating never-before-done (at the time) animation for Red vs. Blue, for which he worked tirelessly to make the character Tex even more awesome than previously thought possible.

After finishing up season 10 of RvB, Oum launched a new web series under the name of RWBY, something he said he'd always wanted to do since he got into animation. As the director and lead animator of the series, he enlisted employees and writers from all sections of Rooster Teeth, including fan favorites from Achievement Hunter, to assist in production. In between his movies, he also worked on an adaptation of Hatsune Miku for M.U.G.E.N.

Another long-term goal of Oum's, aside from making movies for his fans, was to make the most awesome fighting game ever. Some fans begged him to make a game based on RWBY, something he somewhat hinted at

◊ before a RWBY game, Grimm Eclipse, was confirmed at RTX 2014.

At the end, Oum suffered an allergic reaction during a hospitalization on January 22, 2015, and succumbed to it 10 days later. He was 33 years old. A fundraiser

set up after his reaction to help with paying for related expenses ended up raising $210,000. In his memory, Rooster Teeth has challenged

everyone whose lives were touched by Oum and his works to use their creativity to make the world a better place.

Despite his tragic ending, the RWBY creative team confirmed they had the required information to continue and complete it. His older brother, Monyneath "Neath" Oum, has since taken over voicing the character that Monty voiced on RWBY, Lie Ren.

over at GameTrailers, his DeviantArt gallery

Works with animation by Monty Oum:

"the boolean operation in Maya has improved a lot. Thanks Autodesk!"