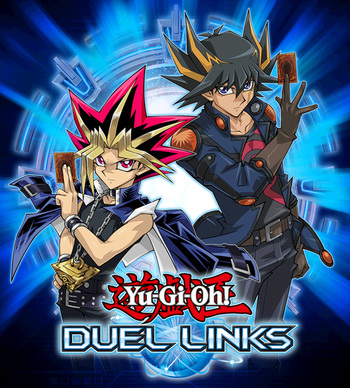 Yu-Gi-Oh! Duel Links is a mobile game in the popular Yu-Gi-Oh! franchise, specifically the Yu-Gi-Oh! manga and anime. Set in the world of Duel Links, the VR world featured in Yu-Gi-Oh! The Dark Side of Dimensions, you start as either Yami Yugi or Seto Kaiba and try to become King of the Duel World, dueling opponents from the obscure to the noteworthy.

Leveling up your character, Stage, and fulfilling certain requirements will unlock more duelists, as well as character-specific skills to give you an edge on the playing field. After unlocking other characters, you can play as them, duel characters you've unlocked, duel players online in real-time, save your best matches, buy cards, and other activities. The game released on November 17, 2016 in Japan and in January 2017 worldwide.

The game uses the Speed Duel