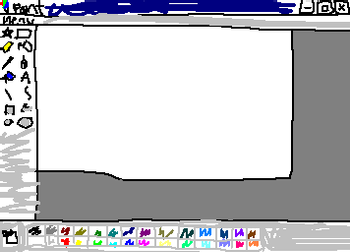 We present to you MS Paint presented in MS Paint.
Advertisement:

Microsoft Paint (usually shortened to MS Paint) is a picture editing program that has been included as a free tool with Microsoft Windows since the very first version (although it was named "Paintbrush", rather than "Paint", during the Windows 3.x era) and always maintained alongside later versions. It is a relatively simple program, offering the bare necessities to create and alter pictures. It has been offered free with the single most popular operating system series in computing history, so naturally it is also the most widely familiar picture editor. Due to its simplicity, however, it is not used by professionals (Unless they're going for that sort of thing).

Due to the birth of many better, more complete image editing programs, MS Paint is now mostly known for its limitations (at least until its major upgrade in Windows 7 and above), which tend to negatively affect the quality of the results:

All of this tends to give it a very computerized look. Anyone that has used the program should be familiar with how it generally looks by now. In the context of art and Webcomics, MSPaint is used as a term to refer to both an artwork style and an implied resulting quality.

The term generally gets applied to things that exhibit this (usually unintentional) art style, but has also seen use as an insult against artists. Referring to something as a "Microsoft Paint picture" when it is clear that it couldn't have been made by that program is to suggest that it has a banal simplicity, a rushed feel or both. Conversely, actually bad artists (particularly those that make bad sprite comics) will blame the low quality of their work on "only having Paint." On the other hand, however, showing how you

made a complex picture

is one of the best ways to score massive artistic cred.

The majority of pure Sprite Comics use Microsoft Paint. It is one of the few fields where using Adobe Photoshop or some other program doesn't really offer much of an advantage. Some Pixel Art Comics use Paint as well, but due to such images being completely new artwork, pixel artists usually want the features of something more advanced. Microsoft Paint also lends itself well to extremely simple designs, especially if you're looking to avoid anti-aliasing and/or feathering. It's also useful if you're just trying to save or crop a picture without having to wait for a more advanced program to load up and fumble through all the compression options.

Webcomics that specifically use the MSPaint style include: