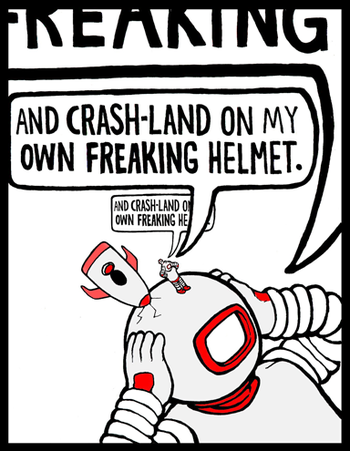 To understand recursion, one must first understand recursion. Multiple worlds that exist side-by-side are fairly common in fantasy and speculative fiction, but sometimes things get more complicated than one dream world, Another Dimension, a simple Alternate Universe, or just one Show Within a Show.

If the characters discover more layers within or without (or the layers are implied within the story), then you have a Recursive Reality.

Recursion is a phenomenon in mathematics and computer science where an equation refers to itself, allowing a finite function to represent an infinite set of objects. In physical terms, it is similar in structure to Russian Matryoshka dolls, which are designed to nest one inside the other.

For extra headache-inducing potential, a creator might mix and match:

Note that there has to be more than two layers shown or implied, or a path inward must paradoxically lead to the outer world (which is closer to an actual recursive equation.) Otherwise it likely falls under one of the simpler Otherworld Tropes. Shrinking into a subatomic world, for instance, does not count as a Recursive Reality unless a character can shrink further and find an even smaller world within, or somehow end up back where they started.

Recursive Canon is a specific subtrope where the work postulates its own existence in-story, or a fictional version of the author also exists in-story (allowing the characters to criticize it or the author or change it, of course.) Compare Mutually Fictional.

Not to be confused with Direct Line to the Author, where the work postulates its own existence in real life, or the existence of a fictional author in real life (as "researched" by the real author, of course.) Compare Daydream Believer, Mythopoeia.

Compare with most Otherworld Tropes, particularly Expendable Alternate Universe, where the importance of all these alternates is downplayed by the assertion of a "real world", Matrix Hypothesis (also known as Recursive Reality), and Up the Real Rabbit Hole, where the "prime" level of existence is called into question. The latter is often paired with Recursive Reality for its headache-inducing potential. See also Daydream Believer, Welcome to the Real World.

Also, try to keep in mind the MST3K Mantra while reading any of the examples. Believe us, it's just not worth it to lose your sanity to these. Because a recursive reality is physically impossible and never will happen.

Spoileriffic trope, as the layering is usually a major plot twist.

"Gaty is safe as well"

"Gaty is safe as well"