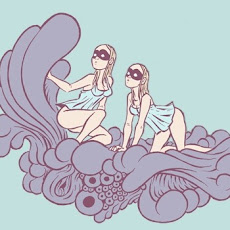 "What do you think these things are for?"
Cochlea & Eustachia

is a surreal webcomic created by Hans Rickheit, featuring a pair of identical masked and scantily clad young women exploring a strange building. Later on they run into a third, and in a further story they encounter an entire room full of them (one of whom claims they look nothing alike). It's not clear where any of them came from.

The first storyline completed after just 66 black and white pages, and has now been published in colour as a book. A second started in mid- to late-2014, this time in colour.