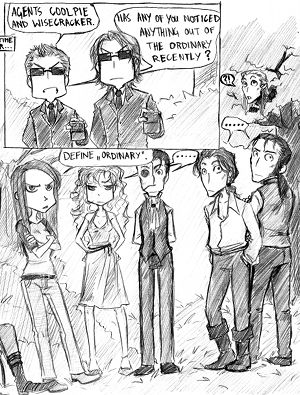 Top panel: Sam and Dean
Lower panel: (Jareth's boot), Sarah, Christine, Erik, James, Javert, and Legolas
"What happens after the film ends and the credits roll" is a subject of fanon everywhere, but in this universe we do things slightly... differently. We ask, "What happens when the film ends, and while everything in it happened, it's still a film? Where do you go from there?" The answer appears to be: Buildingverse!
— Sursum Ursa, Stuff You Like
Advertisement:

In a World…, where fictional characters can go after their story ended. In an unnamed, secret university town with a population consisting almost entirely of aforementioned fictional characters stands the eponymous Building. It all began when Jareth of Labyrinth and Erik of The Phantom of the Opera decided to move in after some years of drowning their sorrows together. And the madness spreads ever since.

In less movie trailer like words: The Buildingverse is The 'Verse that sprung up around the DeviantArt Fan Webcomic Roommates when different authors began producing Spin Offs and otherwise expanding on the source material. Most of these take place in the Building (Building #42) or the University (Saint Jude's), or at least in The Unnamed University Town, but the world outside is big and some already stepped outside... a bit.

It has a Trivia subpage, and—if you didn't need that liver anyway—a Drinking Game.

Notable longer works in the "franchise" in alphabetical order:

Most DeviantArt ones end up in the fan group

Tropes associated with the Buildingverse: